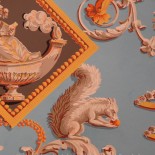 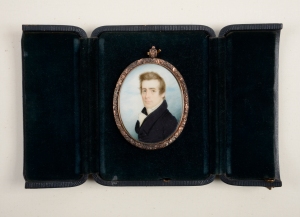 As we digitize and expand the catalog records for the miniatures in the Society’s museum collection, we make connections to items in the Library holdings and expand our understanding of Rhode Island history.

One of the miniatures is of Benjamin Russell Howland (1793-10/20/1827),  the son of John Howland,  a barber’s apprentice who fought in the Revolution and afterward rose to prominence in Providence’s civic affairs. 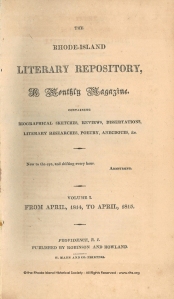 Benjamin Howland was one of the publishers of the Rhode Island Literary Repository, a monthly compilation of biographical sketches, reprints from national and international literary magazines along with some original poetry.  The RIHS Library holds a copy of this short-lived publication, but it appears to have been popular along with East Coast, with copies eventually ended up in Boston, Salem, and New York. 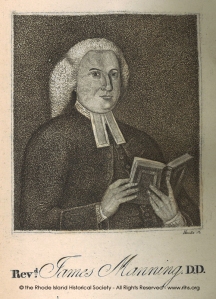 In Volume One, the publishers featured biographies of noted Rhode Island clerics, including the Reverend Enos Hitchcock, and the Reverend James Manning, Baptist minister and President of Rhode Island College, now Brown University.

What Benjamin R. Howland did after publishing the 1814-1815 edition of the Literary Repository remains unknown. He moved to Tennessee, where he died in Nashville at the age of 34, remembered by the Masonic Lodges of Cumberland and Nashville.
~Kirsten Hammerstrom, Director of Collections