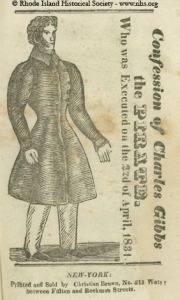 The recent high-profile acts of piracy in Somalia have highlighted the divide between the reality of piracy and our romanticized notions of it. But the desire to glamorize the swashbuckling while ignoring the blood and guts is nothing new**. A New York Times article of 1892 cataloging various famous pirates begins, “It cannot but be a source of regret to every true lover of the picturesque that pirates are no more and piracy has lost its popularity. What tremendous fellows they must have been!” The article includes a paragraph on Charles Gibbs, who is described as having a “soft spot for the fair sex” and being “remarkable for quoting the Bible with great frequency and fluency.” Describing Gibbs’ conversion from grocer to pirate, the author asks “who wouldn’t rather be a gallant pirate with a smart vessel and a picked crew than a grocer in Ann Street, near the Tin Pot?”

The previous post offered an overview of Gibbs’ career as offered in a single one of many published accounts of his life and death, Mutiny and Murder: Confession of Charles Gibbs. This post will highlight a few of the other versions of this popular tale that were offered to the public.***

In The Annals of Murder Thomas McDade lists 13 individual editions prior to 1900 offering an account of Gibbs’ life (Although one particular item makes the count a little difficult.). All those that are dated were published in 1831 or 1832. The Historical Society holds seven of those listed as well as two that are not recorded in Annals of Murder. The latter two imprints**** are apparently unique to the Historical Society; no other copies are listed either in OCLC or a number of international library catalogs. 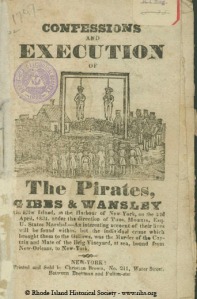 While not unique, one item—Confessions and Execution of the Pirates, Gibbs & Wansley—is by far the most graphically and bibliographically unusual. This is how McDade describes the book’s physical construction*****:

“I.e.” usually indicates something out of the ordinary, and this publication offers plenty of that. The item appears to be a sammelband made up of three separate publications, as indicated in the collational formula above, but even that is uncertain.

The first eight pages offer a blow-by-blow account of the execution itself, with a strong emphasis on the penitent attitude of the pirates as they faced their death. Thomas Wansley, Gibbs companion and clearly described and depicted as a black pirate in this publication, had apparently been writing poetry in his cell:

On the verso of the poem is the following illustration, just in case we’ve begun to sympathize with the penitent and poetic buccaneers:

These eight pages function as a self-contained, coherent unit, and this is echoed in their physical makeup: they are a single four-leaf gathering.

The next gathering begins with the image used at the beginning of this post, a title page with vertical text and a full-length portrait of Gibbs. As you can see from the image, this copy was published after the execution, as it describes Gibbs as the pirate “who was executed on the 22nd of April”. Another variant state of the work also in the Library’s holdings is composed of a nearly identical text (the first and last words of each page match) and a slightly, but significantly, different title page. Rather than “Who was executed,” this title page reads “To be Executed.” The only other significant difference is that the publisher’s name is misspelled as “Christitn Brown” rather than “Christian Brown,” possibly providing evidence that the pre-execution version was offered with a hastily put-together title page. In either case, the two variants bracket the moment of execution in a concrete way (Gibbs is alive for the first and not for the second.).

The third and final gathering is a work titled “A Visit to the Condemned Criminals, Gibbs and Wansley, By a Layman.” (It’s unclear whether “layman” in this context indicates that the author is not a professional pirate or not a professional jail-visitor.). Like the first gathering, it is of 4 leaves, and like the first gathering it includes poetry and an image on a page incorrectly numbered “32”:******

And on the preceding page, this illustration of the ultimate end for pirates (or, perhaps, vampires):

* The description of Gibbs used at the beginning of the narration of his execution in Horrible Confessions of the Pirate and Murderer.

** A recent New Yorker article reviews the legitimate economic and political aspects behind a favorable view of piracy: Caleb Crain, “Bootylicious: What Do the Pirates of Yore Tell Us about Their Modern Counterparts?”  The New Yorker, 2 September 2009.

**** Horrible Confessions and The Confession of Charles Gibbs, the Pirate, Who Acknowledges . . . are the unique copies. Oddly, both copies’ imprints state, “Printed for the Purchasers,” a curious attribution that seems, based on searches in WorldCat and the ESTC, to have been used solely in the US during a period from 1775-1831.

***** McDade’s response: “This kind of publication taxes the resources of the bibliographer.”

2 comments on ““This Sanguinary Monster”*: The Pirate Gibbs, pt. 2”

This entry was posted on 2 September 2009 by jhgoffin in Collection Notes and tagged images, maritime, pirates, seafaring, woodcuts.